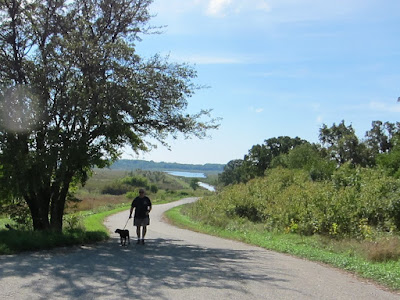 I am going to try it again this week. I am going to write about things totally unrelated to diabetes and see if I can make them be about diabetes.

Because in reality, all roads lead to diabetes. (If you let them and if you have a bit of an imagination.)

Two months ago, not knowing that our life was going to change again, we adopted a rescue dog. Of course it is not quite that simple because we are not doing “simple” right now.

I think German Shepherds are beautiful dogs. I have always wanted to get one. This was going to be my chance. So I filled out the application for a German Shepherd rescue organization and crossed my fingers. When you are filling out the application, you tell them about traits that you want in the dog. Due to our experiences with the last two dogs we adopted, we had some requests.

(We had a wonderful dog that was great with people. She was sweet and lovely. Until another dog came anywhere near her. She then looked like a killing machine. It was very surprising at first and then a bit scary. We always had to be careful. Dog obedience classes did not work out well.

The next dog loved being around other dogs. He would cry if he could not go play with them. Of course after the time he urinated on the head of a small dog, we had to be a little careful with him. His problem was that he did not like children or teenage girls. Since we had a teenage girl when we adopted him, there was some tension but she grew up and it all worked out.)

As a result of these experiences, we wanted a dog that was good with dogs and children. We have small children next door and we wanted them to be able to play with the dog and not have to worry.
We sent off the application and within a week or so we got a call. They were going to bring over a 4 year old male dog that they thought would be perfect. I did ask several times about the dog getting along with children and stressed that it was important. I thought that the answers were a bit vague but I didn’t push it more.

And then the dog arrived. He was a big shepherd and was full of energy. We decided that we would foster the dog for a few weeks to make sure it was going to work out. It seems that the dog had been found roaming the streets and had been picked up by the rescue organization. The dog fell in love with Silent Sam. Not just really liked him but was mesmerized by him. He could not exist with being able to see him. To the point that the dog found a way to break out the back door of the house when Silent Sam went out to run some errands. It was a bit over the top. Then our son came home and the dog felt that he needed to attack the stranger in the house. It was not a pretty scene. Our neighbors were not very happy either. They were sure the dog could jump the fence and attack their children.

So, after 48 hours we called because the dog had to go. The rescue people were very nice about it and suggested that perhaps we had too many people coming to our house to be a good choice for a shepherd.

This experience took the wind out of our sails for a few weeks. In giving it some thought, it seemed to me that perhaps a Labrador Retriever was a better idea for us. Before we adopted our last dog, I had applied to a Labrador rescue organization and had discovered that they had a long waiting list. Since I was not exactly in a hurry, I filled out an application for the lab rescue.

I got a message from them within an hour. No kidding, an hour. They had a dog that they were bringing up from Texas (??!) and would like to bring her over the next day so that they could do a home inspection and perhaps we would want to keep the dog.

Ah… okay?  Once again, I was assured she was good with kids and dogs. 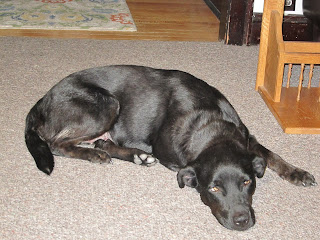 When I opened the door the next afternoon, I had one and only one reaction. “She is kinda small, isn’t she?” We have always had big dogs and here was this dog that was certainly not the size of any lab that I had ever seen. She did seem very sweet and went right up to the little girl next door. We decided to foster Sadie for two weeks.

Well, since I started by saying that we have had a dog for two months, you might conclude that we still have Sadie. We do. The day after she arrived, the rescue people called to say that Sadie had heart worm and hook worms and would need medicine and an overnight vet visit. We made it through the month of meds.

As with all rescues, she has a few quirks. She is slowly getting better. We actually call her scared Sadie most of the time. She was scared of everything and spent most of her time with her tail tucked so far under her that you would not have known she had a tail. She now has her tail up and wagging most of the time. She still will not go outside by herself and will get scared when the children next door make a lot of noise around her. She would not even take a treat from me for the first six weeks. She now has no trouble taking treats.

We have not been able to cure her of going on the furniture but most of the time she does not do it when we are looking. She is in dog obedience classes. She was the belle of the first class because she was so obviously scared that everyone thought she was adorable.

She did not bark for the first six weeks she was here. Now she will usually bark when the mailman comes and yesterday she did try and protect me from the heating technician. It might have been a bit more believable if she had gotten within 5 feet of the guy but she had good intentions.

Are you wondering how I can relate this long dog story to diabetes?

Like Sadie, diabetes is pretty scary when you are first diagnosed. It takes time to get it sorted out and find your way to a new normal but soon you will adjust to a new way. 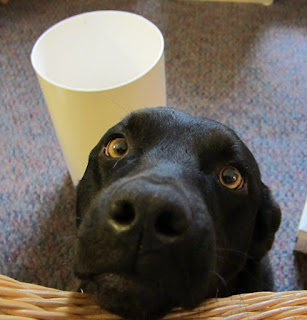 There is a nose nudging me to say it is time to go outside. Unfortunately together. I have to get this solved by winter….