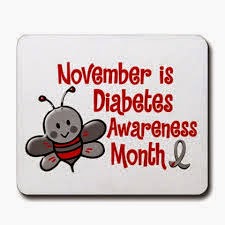 The American Diabetes Association is hoping to raise awareness during the month with Get Moving Mondays, Tasty Tip Tuesdays, What's Cooking Wednesdays, Get Together Thursdays, Fact Check Fridays, and other things.  I urge you to take a few minutes and check out the web site to see what each of those things means.  There is lots of information there that could be of interest to you.

Did you know that it was Diabetes Awareness month?  Do you do anything special for Diabetes Awareness Month?  I would love to hear about it if you do.  Silent Sam and I don't usually do anything but I think it would be a great time to do some fundraising for the American Diabetes Association.  Maybe one small thing (and small things add up) would be to go to the Association web site and look (and perhaps buy) something from their shop.

Another thing you could do was make sure that you have seen all the doctors that you should see.  Have you been to see your eye doctor in the last six months or year?  How about your podiatrist?  With the end of the year just around the corner, it is a good time to go and see them before your deductible starts over again on January 1.  (How could it almost be 2015??!!)

Maybe you could take some time to read about diabetes and the progress they are making with the disease.  While the numbers of people with the disease are increasing, the people living longer healthier lives than they were before.