A Hairy Stinky Mess - a post not on topic 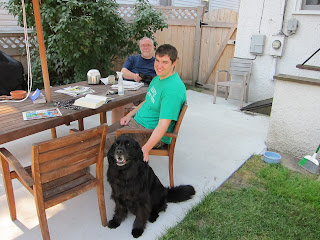 You see before you a happy family shot from a couple of years ago.  See that dog in the picture?  That is Kirby.  He is hairy.  Really hairy.  In fact, he is named for the vacuum cleaner.  We have had Kirby for 10 years.  For 10 years I have vacuumed like crazy.  We picked up Kirby from a shelter when he was three years old. He came to us with an assortment of quirks.  Some have gotten better over time and some haven't.


Sometimes his plate shifts.  When that happens, we just sort of back away.


Kirby had a new experience today.  Kirby got sprayed by a skunk.  Did I mention that he is really hairy?  Before we figured out that he got sprayed, he was back in the house rubbing his face all over the carpet in the dining room.  Ohhh the smell.  We were not really sure what had happened except that the smell in the house was overwhelming.  Silent Sam and daughter went off to work.  I opened all the windows and turned on fans in every room.  Did I mention that it was 30 degrees out?  It really stunk.  After about an hour, daughter called to say that she and SS were getting kicked out of the workplace because they smelled.  About that time, I decided that it was the dog that really smelled and that probably the carpet did too.


Thus started the internet search for remedies.  And, in case you were wondering, it was cold and it stunk.  Most of the postings gave the same mixture to cure the dog part of the problem.  As far as the carpet goes, there was some consistency there also. So off I went to the grocery store.  I bought 7 boxes of baking soda, 9 bottles of hydrogen peroxide, a large container of Dawn dish soap, a jug of Downey fabric softener,  2 Febreze candles, one Febreze plug in, 2 Febreze stand alone air fresheners, 2 Febreze air fresheners for the car, and 2 quarts of white vinegar.  I might have gone a bit over the top.  Really, I should have read the amounts of baking soda, hydrogen peroxide, and Dawn needed for the concoction.  Daughter volunteered to wash Kirby.  I started on the inside.  I sprayed down the carpet with the vinegar.  I sprayed down the carpet with Febreze. Then I did it again.   And again.  In the meantime, Silent Sam and daughter washed the dog three times with the mixture.  They could not tell if the smell was gone.  They then used the other method that I read about.  They used Downey fabric softener.  I was called outside to check on the smell factor.  He smelled like Downey so we decided that he could come back in to dry out.  To prepare the house for the return of the dog, I closed the windows and turned on the heat.  I happened to take my shoes off.  The carpet was, shall we say, saturated from the sprays.  Also per suggestions, I  have dishes with vinegar located throughout the house.  Supposedly the vinegar will capture the skunk smell.  You just have to live through the vinegar smell.


On a positive note, to try and warm up the soaking wet (did I mention, hairy) dog, we cleaned the oven.  Did you know that when you clean the oven that it heats to about 500 degrees?  Yes, I now have a clean oven.  And a wet dog in the kitchen.


My house still smells.  I am not sure what it smells like at this point but it smells.